Officially opened by the Dutch King

The King was welcomed by Ferdinand Gremmen (SDK Real Estate / VolkerWessels) and Campus Director Erik Veurink. After the tour of the Campus where the King visited KMWE, Summa College and Fieldlab Flexible Manufacturing, the official program started.

All BIC employees, BIC students and many guests were invited. Ferdinand Gremmen, Petra van Lange (Executive Board of Summa), Edward Voncken (CEO KMWE), Erik van Merrienboer (Provincial Executive of Noord-Brabant), Stijn Steenbakkers (Alderman for Economic Affairs Municipality of Eindhoven) and Mayor Jorritsma of Eindhoven talked enthusiastically about their contribution to and their vision on the future of BIC.

King Willem-Alexander activated a high-tech robot, which milled its initials into a Coin. We had the opportunity to collaborate in realizing this final coin of the artwork of Juul Rameau.
At the end of the morning the King placed this Coin in the artwork which was placed in front of the BIC building, making the opening official. A special day and a major milestone for the high-tech manufacturing industry. 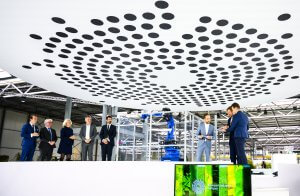